Dr. Juan Jose Daboub, PhD, serves as a Director at K&M Advisors and the Vice Chairman at The Dorado Group. Dr. Daboub co-owns businesses in Central America and serves on the Board of Directors of several companies in the USA, Latin America, the United Arab Emirates, and Europe. He is the founding CEO of The Daboub Partnership and the Global Adaptation Institute. As Managing Director of the World Bank, from 2006 to 2010, Dr. Daboub oversaw operations in 110 countries in Africa, Asia, the Middle East and Latin America and was responsible for the oversight of the Human and Sustainable Development Networks, the Information Systems Group, the World Bank Institute, the Department of Institutional Integrity and the Arab World Initiative. From 1999 to 2004, Dr. Daboub served concurrently as El Salvador’s Minister of Finance and as Chief of Staff to President Flores. In these high profile dual roles, Dr. Daboub helped to navigate his native country through several regional economic challenges including securing and sustaining El Salvador’s investment grade rating, “dollarizing” the economy, and completing a Free Trade Agreement with the United States. He was President of the Electric Distribution Companies (1994-1996) and of ANTEL (1996-1998), the state-owned telecommunications company of El Salvador, which he re-structured and privatized through a competitive and transparent process that also de-monopolized that strategic sector. Dr. Daboub holds a Bachelors of Science, Masters of Science and a PhD in Industrial Engineering from North Carolina State University. He is married with four children. 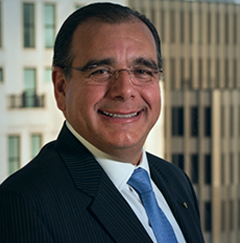